A matter of tie strenght, centrality and density

Edit: this paper has been published and presented during the 23rd Bled eConference. The paper can be downloaded here.

During my master ‘Knowledge and Information Management‘ at the VU University, I attended the course ‘E-business and information management’.  Together with my team members Sophie Haverkamp and Fariha Mahmood, I wrote a scientific conceptual paper of the causal relation between social network characteristics and the technology acceptance. Since I think the developed model and underlying logic can be interesting for various persons, I will describe the papers key findings and propositions. The complete paper can maybe become published, so I cannot offer it completely yet.
Abstract:

The technology acceptance model (TAM) (Davis, 1989) is being considered as the most influential model in this research stream (Lee, Kozar and Larsen, 2003). Several studies extended the model of Davis (e.g. Adams, Nelson and Todd, 1992; Hendrickson, Massey and Cronan, 1993; Segars and Grover, 1993; Venkatesh and Davis, 2000). One of the latest extensions of this model are the Unified Theory of Acceptance and Use of Technology (UTAUT) (Venkatesh et al., 2003) and TAM3 (Venkatesh and Bala, 2008).

Within these individual technology acceptance models, the concept of social influences indicates that individuals’ acceptance behavior is being influenced by others. The main root construct of this social influence variable is the subjective norm concept (Venkatesh et al. (2003) and Venkatesh and Bala (2008)). The subjective norm is the belief of the technology user that most of the important others believe he/she should, or should not, perform the behavior (within this context accepting the technology). Since the introduction of the subjective norm construct, scholars have taken it as a single construct (Lee, Kozar and Larsen, 2003). However, previous research in the last two decades acknowledges the fact that “social norms need to be conceptualized in a more distinguishing manner to capture the nuances of the social environment” (Srite and Karahanna, 2006, p. 697). For instance, Davis et al. (1989, p. 998) stated the need for “more sophisticated methods for assessing the specific types of social influence processes at work in a computer acceptance context” while Venkatesh and Davis (2000, p. 200) suggest a repositioning where “the nature and role of social influence processes (both within teams and across teams) will need to be elaborated”.
This research study addresses this limitation seen in the technology acceptance literature so far by extending TAM to incorporate the influence of the different types of social network characteristics on technology acceptance. As already described, this study uses tie strength, network centrality and network density as antecedents for subjective norm and as such, as influencing factors in users’ adoption of new technology. Social networks can influence subjective norms, since information exposure, exchange and legitimization are being influences by social network structures (Haythorntwaite, 1996). For instance, two actors who share a strong ties are more likely to trust each other, exchange knowledge more frequently and influence each other in the decision-making process, while network members can also influence decision makers by using their network positions in order to control, promote or restrain information (Burt, 2000). Our research model is visualized in figure 1 and its propositions will be shortly described. 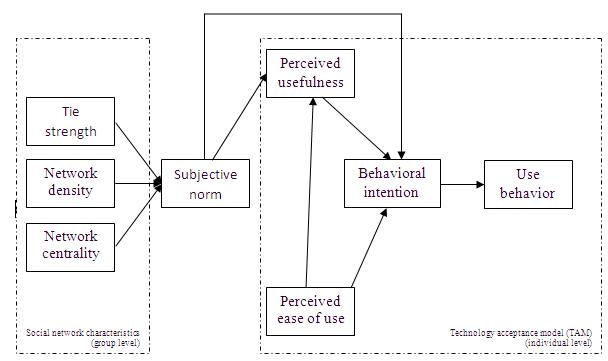 Tie strength characterizes the closeness and interaction frequency of a relationship between two parties (Levin and Cross, 2004). Ties can influence the subjective norm in various ways. Some examples follow. Actors who are connected through strong ties are most likely to trust each other (Adler and Kwon, 2002). Granovetter (1973) notes that actors who are sharing a strong tie tend to influence one another more than those sharing a weak tie. Further, Granovetter (1973) notes that actors connected trough strong ties share similar views. Chow and Chan (2008) state that organizational members who have a more extensive social network with their colleagues would perceive greater social pressure for sharing their knowledge, because a good relationship results in high expectations of colleagues.This leads to the first proposition:

Coleman, Katz, and Menzel (1957) find that individuals who are highly integrated into a social system are in general quicker to adopt than individuals who are isolated from the group. These isolated peripheral actors were less influenced by others and learned primarily about the innovation from outside sources. A central network on the other hand, provides the structure that connects individuals and gives them easy access to other network members. This can reinforce the current subjective norm considering technology acceptance. Therefore is it much likely that in a highly central social network the group is more likely to adopt a new information system technology.

Network density enhances conformity and solidarity within a working group (Krackhardt and Hanson, 1993) and that a dense network increases the degree of trust, cooperation, and commitment (Coleman, 1990; Sparrowe et al. 2001). A dense network increases the flow of information (Rowley, 1997). Further, ties that are interconnected tend to develop shared norms, behavioral expectations and promote interpersonal cooperation (Brickson, 2000). A dense network consisting of strong ties is tend to share a majority view (Janis, 1983), reduces uncertainty, create meaningful information (Weick, 1995) and tend to produce homogenous evaluations and normative pressures (Friedkin, 1982), which can lead to a reinforcement of the subjective norm and social influences via group solidarity.

The model does not attempt to capture all social variables which could influence the acceptance of a new technology. There are many more variables which can have an influence (see Venkatesh and Davis, 2000), but the model can provide some guidelines how a company can make use of its ‘informal’ social networks to better understand their employees in order to better understand the drivers behind the actual use and acceptance of a system. This research contributes to prior research as it focuses on social network characteristics and their influence on technology acceptance. As social network characteristics are group-level characteristics and the TAM model is on the individual level, there was a need for a mediating variable which translates group-level characteristics into individual-level characteristics. This was filled in with the subjective norm concept (Fishbein and Ajzen, 1975), since social norms and interpersonal communication networks play significant roles in affecting adoption decision (Yi et al., 2006).
Pagina delen: